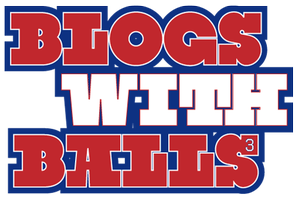 This past weekend I had the pleasure of attending Blogs With Balls 3 in Chicago. Really enjoyed myself at the conference and wanted to write up some thoughts about the experience as well as some positive and negative feedback about the event.

I attended the first event and thought it was a great success. Getting sponsors, a venue, and some of the biggest names in the sports blogosphere to all support such an ambitious event was truly a landmark achievement and you have to applaud the event organizers Kyle Bunch, Chris Lucas, and Don Povia for pulling it off. Below is a video I did with Kyle as oddly enough we shared a flight back to the Bay Area after the conference. I think he actually was the seat in front of me and is now knowledgeable about the odd sounds emitted by a sleep deprived Chinese Jew.

BWB 2 I had to miss but I heard good things. I think the sentiment was that the event was hindered by the fact it was part of the larger BlogWorld Expo convention. Many sports 2.0 organizations had tried and mostly failed to have an informative, intimate, and well attended sports track at BWE. The BWB guys broke through to some degree but I think they really feel an independent event could have been better.

So considering BWB1 and BWB 2 were both events with unforeseen challenges, you could say BWB3 was really the first event of the series you could really take a deep look at the value, execution, planning, and content of the event. Here is what I came up with:

June in Chicago was a great idea. 3rd event in about 12 months felt about right. I think having an event about every 8 months going forward would be the right balance. Loved the Midwest location and the fact that Chicago has a very solid base of bloggers that were out in full force and were great hosts.

The Wrigley Club I think was a cool idea and fit with the sports theme, but unfortunately presented some mild logistical issues. Pros included lots of area to talk and chat outside the venue, historic and central location, and an easy accessible bar with some memorable bartenders.

Unfortunately though the semi outdoor location (under an overhang with curtains duct taped to it) presented some distractions ranging from loud rain, sirens, general street noise, and some modest humidity. Given I was a bit overdressed, a little hungover, and a big guy to start with, the humidity combined with some cheap chairs made it a bit uncomfortable at times. The curtains kept falling off the overhang awhich led to there just being more noise and a lot of distractions if you’re in the business of people watching like I am.

In the end I think it “felt” right but its drawbacks made the event less enjoyable too many.

The BWB guys here have a tall task every event. Drum up interest in speakers across this vast space, fit them into panels, and have an event flow with informative and entertaining content to a very diverse audience. I helped put on 2 conferences back at a job which seems ages ago and getting the agenda right was just a nightmare of an assignment, but the most pivotal to the event.

I am not going to do a breakdown of each panel (hell if you’re that interested check out the whole conference on Justin.tv).

Looking back I really enjoyed a lot of the panels and thought there were some great panelists that I wanted to see. However one thing that stood out was how cookie cutter the schedule was. 6 panels, all the same amount of time, with a moderator, and with 4 or 5 panelists.

I think a lot of the content was actually muted a bit by the aforementioned street noise, distractions, etc but also just a predictable pace and format that zonked out many. Having the 6 panels all following the same template seemed to just weigh down the atmosphere and attentiveness of the crowd considerably.

A lot of the panels were really good but hindered a bit by either 1-3 panelists that didn’t add much or were just bad fits. In some cases certain moderator just didn’t really maximize the time and discussion. No names need to be mentioned but I think about 50% of the moderators and panelists get A or B grades, while 20% got a C, and maybe 30% or so really missing the mark. 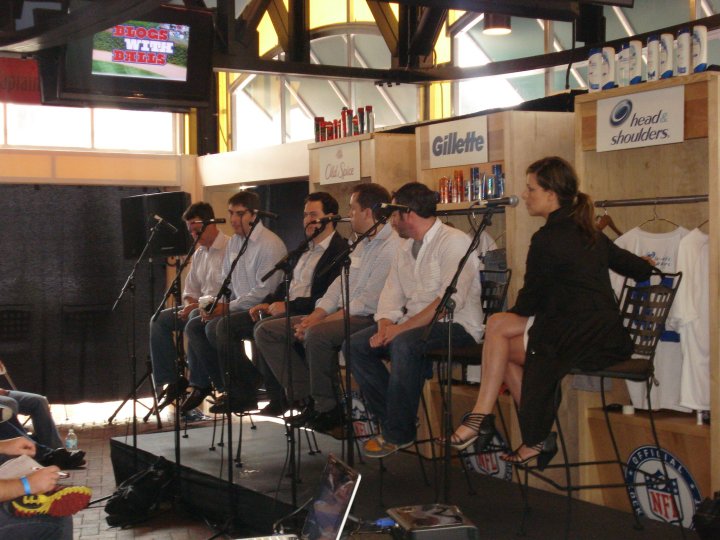 Next go around I would maybe go with smaller panels and maybe tighter sessions. Also some more multimedia, keynotes, and comedic stylings of Spencer Hall would have helped break up the 7 hour event.

In the end I think the 6 topics were good choices and many of them get high marks. I would have liked to see a panel with all of the bloggers who have recently found employment via the sale of their blog entity (Basketball Jones, The Big Lead, EDSBS, The 700 Level). Although some details are probably confidential, I think a lot of bloggers want to know how to get to a finish line as well as know how those developments unfolded.

There has been a bunch of chatter about some of the panels in particular (see here and here). Rather than blab about some of these issues that have been covered at length, I’ll say that having these genuine and passionate discussions unfolding at BWB is only further evidence that these events provide value for the space as a whole. Credibility, accountability, profitability, legality and morality were all touched upon and debated and in the end you’re not going to have these frank discussions without BWB.

Also found it wierd that there was a decent sized gap in between the end of the conference and the after party. Some people seemed kind of torn about attending the after party or just calling it a day. The gap provided some people a chance to put their feet up and in many cases we lost a lot of attendees as they were a bit worn out after a long day.

Great lineup of sponsors. A pair of open bar parties bracketing the event (thanks Yardbarker and Bleacher Report). Proctor and Gamble really stepping up and showing interest in the space. Wish some of the giveaways they provided for the attendees could have been brought back on a carry on bag (had to trash some shampoo and shaving cream at the airport) but it was nice gesture and they got a lot of nice activation and PR at the event.

Justin TV provided a lot of value with the streaming and video archiving. SBN took care of lunch and Jeremiah Weed gave us a midday buzz. Unfortunately for me there were some minor issues here.

I was in the bathroom when they explained that Jeremiah Weed was giving out complimentary Sweet Teas (Arnold Palmers with Vodka in them…aka John Daly’s). I grabbed one with my lunch, put down another when a waitress swung by with more. I thought Jeremiah Weed was some brewery I didn’t know and that the Arnold Palmers were the non alcoholic alternative drink. Given I was a tad hungover from the night before, it was humid, and I went long sleeve with jeans, I was looking to hydrate.

While talking to some blogger folks I had another 2. It was midway through the first panel of the afternoon that I inquired if there was booze in the drinks. Definitely slowed me down a bit, but more just a comical cautionary tale.

I really enjoyed the conference because I got to reconnect with some folks as well as make some new connections and contacts.  Probably going to leave some people out but really enjoyed catching up with Jim Bankoff (thanks for the on stage shout out), Diana Klochova, Joe Fortenbaugh, Alana Nguyen, Spencer Hall, Trei Brundrett, Brian Cook, Dave Nemetz, JE Skeets, Tas Melas, Eamonn Brennan, Ryan Corazza, Tom Fornelli, Adam Best, and Enrico Campitelli Jr.

Really enjoyed meeting Jason Priestas, Gene Zarnick, Zach Harper, Ed Maisonet, Zach Best, Trey Kirby, Matt Olsteen, and Ian Sohn who gave me a nice shout out on his blog. Thoroughly enjoyed fellow Buckeyes Robert Littal and Josh Zerkle (awesome guy) who both did fantastic jobs on their panels and that’s not me being a homer.

Can’t leave out the organizers, Kyle, Don, and Chris for another successful event.

Personally the juice was well worth the squeeze for this event and I got to rub elbows with a lot of great people and had a lot of substnative dicussions about this space and my company in particular.

Some chatter of BWB going to the South next go around. Austin seemed to be a strong contender. This space definitely needs a meeting of the minds 1-2x a year and they’ve really crafted this event to fill that void.

At the same token the success of the event and the rise of sports blogging is attracting a more diverse crowd with various experience and connections to the space. Also the organizers seem to have a lot of new exciting things in both their careers and personal lives.

You’d really like to see BWB4 be something special especially as developments within the space seem to be unfolding at an accelerated rate. BWB is a great concept with a great team and I look forward to see what the next one will bring as I have high expectations for the event but more importantly sports blogging as whole in the next 6-9 months. Hopefully a large part of that will be from my company and we’ll be one of the many big things that may unfold in the second half of 2010.