If you’re reading this on Tuesday March 30th and have not been over to ESPN.com yet, you can probably still go over there now and see a really best in class ad campaign Lexus is running on ESPN to promote their hybrids.

Its funny because only 2 weeks ago I tabbed Lexus as my commercial of the week with their milestone ad. You can click the link to see the commercial, but it basically is a series of milestones that have occurred since Lexus started making hybrids 6 years ago.

Now they’ve moved the campaign online and are further emphasizing their legacy in the luxury hybrid space. Below is an online advertising play by play of the experience/campaign with a summary of why its awesome at the end. Click read more to continue.

The screenshot below is called a roadblock or prestitial and they are expensive. Although it looks like you’re on ESPN.com, this actually is a snapshot of what ESPN looked like in 2004. The new ESPN to their credit has come along ways although for back in the day this was pretty good.

Most roadblock/prestitial ads only run once a day (the first time you go to a site), and then not again until its another day that the campaign is live. Often these type of ads are 1 day campaigns as as you’ll wise up to the disruptive ad and click to get to your intended site. Notice how on the top right, their is a link to bypass the ad.

However the ad is so crafty, what visitor is not going to freak out and investigate why ESPN.com has suddenly morphed back to a previous version of itself? If it my browser? Am on I the wrong site? What is this?

Roadblocks are expensive because they’re disruptive. This one is extremely disruptive as many visitors will do more than a double take. Because of this, this type of ad usually pays 5-8x what a normal banner ad would pay.  And to think ESPN.COM will load in few seconds and another batch of ads will load again so this isn’t actually taking away ad impression from ESPN.com they’re additional impressions paid at an insane premium. 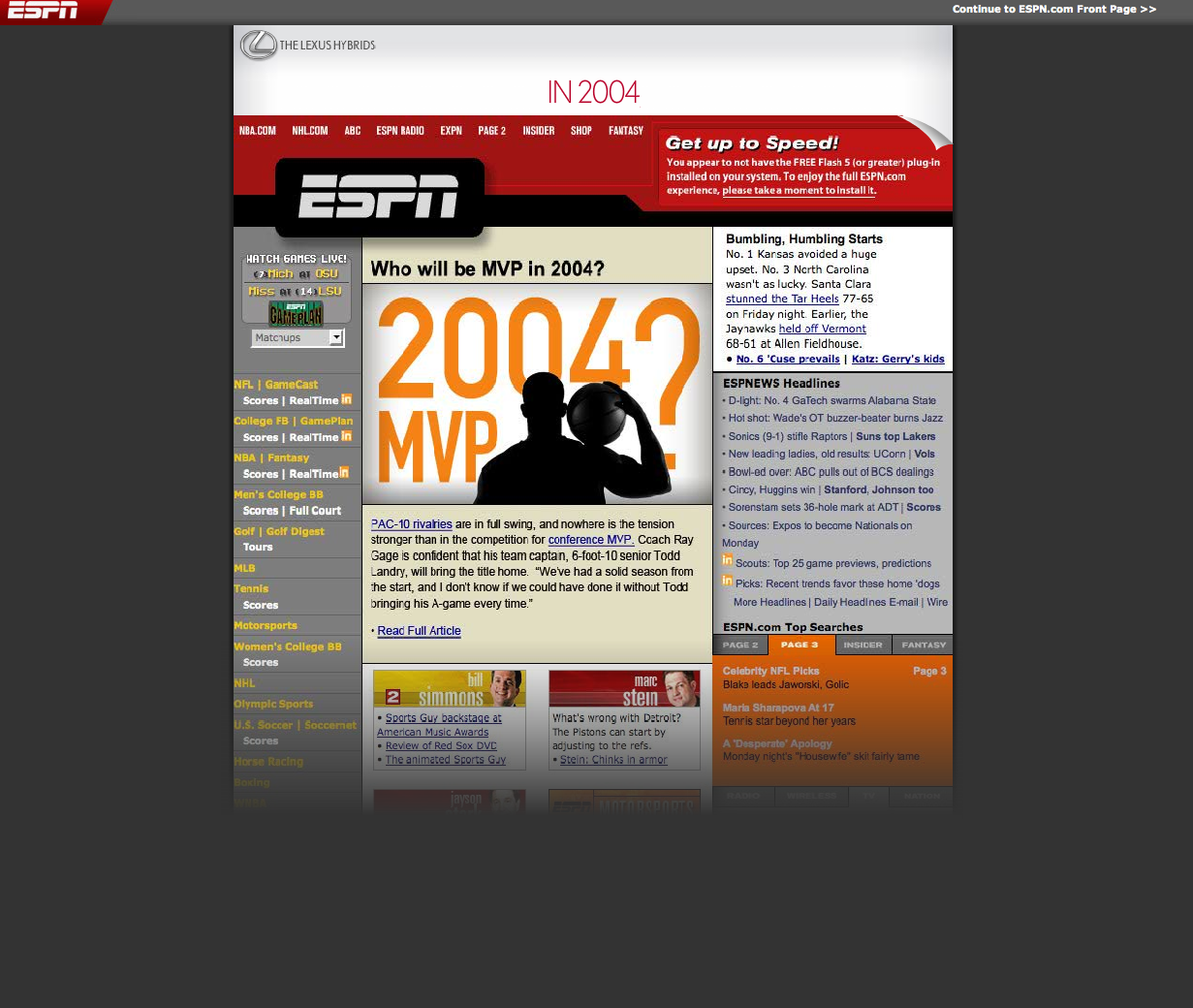 The first couple of seconds of the roadblock is the image above. If you don’t look at the Lexus ad initially, it flashes some text that is likely to grab your attention. Something to the effect of “man things have changed since 2004.”

The ad finally resolves to a peel ad like you see below connecting the dated version of ESPN.com from 2004, to the initial launch of Lexus hybrids. 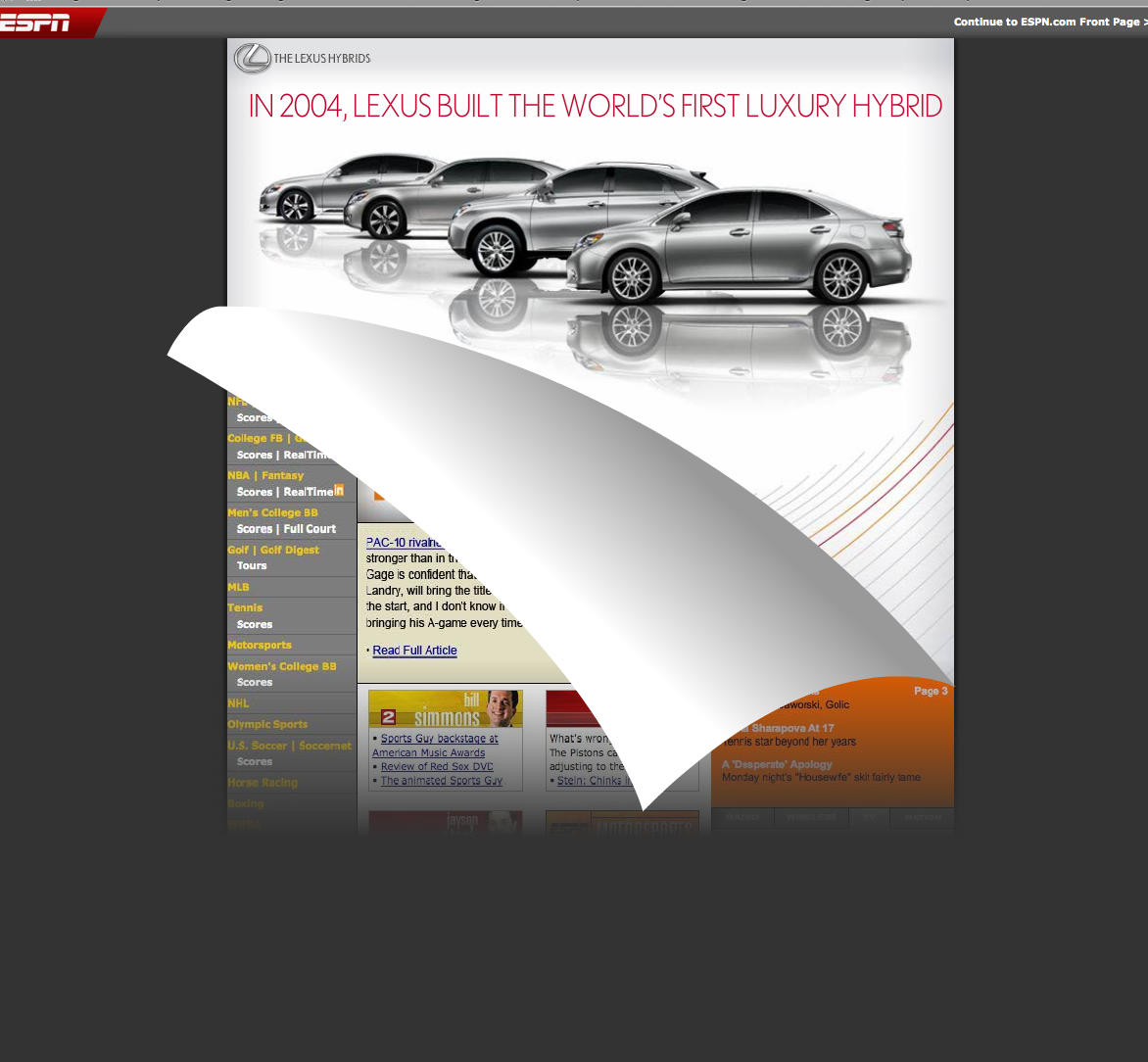 After enduring that whole experience you’re finally at espn.com. As said earlier this only happens once per visitor in a given day and it lasts about 5 seconds. Now on the real ESPN.COM there are 3 follow up Lexus ads framing the content and with different messaging.  The two horizontal ads are non IAB units and are harder to avoid as the box ad on the right is something over time your brain can ignore more easily.

Why its an Awesome Campaign:

Because you almost have to take notice. What ads did you see on ESPN last week? How about yesterday? What ads are on this blog right now? You don’t know. You’re likely a web savvy person having ended up on this corner of the internet and thus pretty good at mentally filtering out advertising.

But the Lexus roadblock is such a curveball for a popular site that loads the same way 29 out of 30 days in a given month. To the millions of people who are regular visitors, they’re greeted with a WTF moment with the dated ESPN layout. By the time they realize its an ad, the Lexus text begins to guide them back to ESPN.com before they can bypass the ad.

You’re so taken aback by the the ad, you almost feel compelled to just let it play out or are too slow to even make a move. And then finally you’re where you wanted to go. You were subjected to 5 seconds of advertising and a strong point was made. Lexus made hybrid cards back when the internet looked like shit and Bob Huggins coached at Cincinnati among other headlines you can see. Was that so bad?

Most people won’t care but for the higher end consumer who is thinking of buying a luxury hybrid, well Lexus just invaded your world and told you what the deal is. Buy us because we’ve been doing this longer than anyone. If you’re intrigued by what we’re talking about, click one of these ads to learn more now that you have landed safely on espn.com

I am probably one of a real small minority that love stuff like this and there is a vast majority perturbed by all of this. The bottom line is that brands are still spending a fraction of what they should be online compared to television, radio, print, etc. Online is growing at a good clip even in this downturn, but its campaigns like this that open up the eyes to the advantages of advertising online.

With a lot of progress still to be made in getting more ad money to online and then also to sports blogs, you should be supportive of these type non standard ad campaigns as it is a huge revenue boost for content providers like ESPN.  The more campaigns you see like this on ESPN and elsewhere, the more budget publishers have to pay great content producers like the many authors of Bloguin. Its disruptive, a little sneaky, but at the end of the day several employees salaries over at the mother ship were paid for on this ad alone and its hard to argue with that (unless it was Woody Paige, Stephen A, Skip Bayless, or Rick Reilly).