For now this is just a placeholder until I get some more time to writeup some of these developments. I have some emails into some people on the FanHouse Sporting News partnership and am getting some info that will help paint a picture of what that whole mess situation is about.

But what’s crazy is that this just one of a handful of rather significant moves going on that I’ll link to for now and maybe add some commentary later. If you’re a normal person who doesn’t stalk this information down like myself, here is what you missed.

– Fanball is shutting down. At first it was the blog network. Now Liberty Media is closing the whole thing down. I learned of this last week but sat on it but now that the cat is out of the bag, its another example of a large media company running getting boxed out of sports on the digital front with so much competition from Yahoo, ESPN, CBS, and Fox.

– Bleacher Report is now paying writers. Looks like they’re doubling down on their best writers. If you want the quality of your content to improve you need your best people incentived to create more content anD fresh off its new round of capital seems eager to shed some of their content stigma = especially as they get chummier with media partners like CBS,  Washington Post, and other newspapers.

I like the move and appreciate the guys coming onto the site in my last article’s comments and defending their strategy. I’ve never questioned that B/R has great content but just have been turned off by some incidents where some things slipped through the cracks that have become very public. Loved the tweet by my former boss Pete, CEO of Yardbarker, on their strategy although he could be referring to stuff like this as their “party in the back” .

– There are 3 interesting new ventures that launched this week as well that in include:

Quickish– Dan Shanoff‘s attempt to be the ultimate almost real time curator of what’s going on in the sports world. A+ on the design. Concept is solid. Not sure how “big” this could be but its certainly off to a favorable opening week. I knew Dan was working on Quickish for awhile and the cynical side of me thought this could be a huge whiff (just because most sports startups are). Glad to see Dan bunking the trend and wish him the best of luck.

Hitpost– You can read this article or just check out the screenshot below to get a feel for what they are. Its only in Beta now and only a lucky few like the world’s greatest chinese jew have access for now but that will change soon enough. My reaction at first is “looks cool……now what?”. Allegedly there are a lot of mobile apps and other features coming and the web experience is just a part of what they’re going to do, so for now I’ll reserve judgement. Very similar at first glance to Flipboard which launched not too long ago. Check out their video to get a better feel for them as well although its not a pure sports startup by any means. 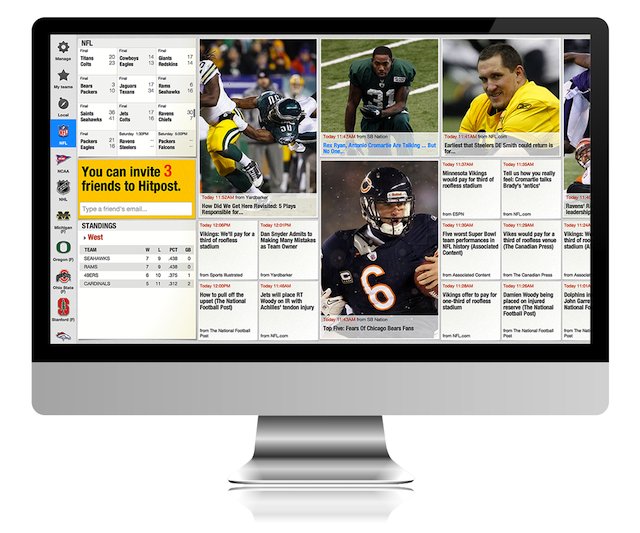 ThePostgame.com-  Yahoo and Sports Fan Live have partnered to launch ThePostgame.com an online magazine also utilizing high end presentation to package content. This I think might be the biggest winner of the bunch as its backed by Yahoo and has some added help from Sports Fan Live. Haven’t drilled down that much on the site yet, but it seems to have a vision and one that is not messy or intertwined with boring or just crappy content. Frankly speaking I think this is going be a big hit after 10 minutes on the site.

If you look at the three new ventures, its clear that all three are centered around the presentation and packaging of content in innovative ways. Lot of attention to design and to mobile/tablet consumption of media. Very nice designs and innovative concepts.

– ESPN announced that they’re going to continue auto playing videos all over the site and aren’t really worried about any of this because they’re ESPN and innovation and social is just something they don’t do.

– Then there is this whole situation with AOL’s FanHouse sourcing their sports channel to Sporting News. I’ll do a full writeup tomorrow as I think I set a new personal record of email activity in a day.  In a nutshell though Sporting News found a way to be revelant online, good people at Fanhouse are going to lose their jobs (40-60 is the rumored number), and AOL really lost me here with this move. Nobody is saying good things about this and my opinion is not that rooted by the fact I value online sports coverage and think it will be a lucrative niche on the web.

10 million people read Fanhouse a month and I’ll dig into some numbers tomorrow but for many, AOL is a company you don’t have any connection with. I am guessing a decent chunk of that 10 million readers are very occasional visitors to the site funneled by AOL.com and tied into their usage of AOL’s ISP service, but still millions of users are now losing their only touch-point with AOL as a company as they’re giving up despite being a top ten property in the sports category.

AOL is still profitable has ~$600 million or so in the bank and has been spending around 9 figures a year on acquisitions. You couldn’t foot the bill for FanHouse or find a way to make it profitable? Just vintage AOL here as only AOL could pay $850 million for Bebo and sell it for $10 million 2 years later. Anyone could of told you that this was not going to work and you were grasping at straws:

AOL’s intention, they told press in a briefing call this morning, is to marry AIM and ICQ with a proper social network. At a high level, AOL is saying they are basing much of their go forward social networking strategy around AIM. Layering in Bebo, they say, lets people communicate both synchronously and asynchronously

That was their old management and their new management has been bold in making some big moves. The middle half of 2010 saw some people growing weary of the new direction of AOL, but they’ve since won over some support with many believing a second wind was in sight for the former corporate giant. I was one of those people but have jumped off the bandwagon now. They’ve been beating the drums for the last year or so screaming about online premium content and then they just kill off one of their biggest brands and then give the remains to Sporting News? Crazy and more on this tomorrow.