Although this hasn’t been 100% confirmed at this hour, it looks like Ballhype.com along with its sister site Showhype.com as well as Daily Radar have been shuttered by their parent company, Future US. Below is the screenshot of what you get when you try to reach all 3 of the sites.

Some bloggers are holding out hope that maybe the site has just been hacked but former Advisory Board member Alana G seems to confirm on Twitter that the site is done. I’ll concentrate most of this blog on strictly BallHype opposed to the other properties that are being retired with them as my knowledge of the other properties is very scant.

The move seems to be oddly timed considering the return of football is a couple weeks away in addition to the fact that the site just underwent a redesign. Ballhype also seemed like a site that didn’t need too much resources as the content and voting was all done by users and not editors. Most of the work behind the scenes I am guessing was on the technology front.

In the end there is no doubt in my mind that this decision was financially motivated. If you recall, Ballhype and Showhype were purchased for reportedly about $3 million in 2008 by Future US, which is primarily a niche magazine company. Some thought it would have been wise to holdout for a larger payday, but given BallHype was founded by a couple who had not raised any venture capital and the site had no revenue because they didn’t have advertising programs, in retrospect it was a well timed exit. In the first 90 days after the acquisition the economy collapsed and I think its unlikely to think it could have garnered a higher valuation since.

For those unfamiliar with BallHype, it was essentially “Digg For Sports” an expression that was bestowed on them by many publications which also was thrown around in the early days of  my former employer, Yardbarker,  when their homepage had a similar community voting system. At its core, Ball Hype was a democratic way to promote content. If you thought you had great content, then depending on the subject matter and your ability to round up votes,  users could “hype” your content allowing it to be showcased higher on ballhype.com.

Some of my finest traffic days here at benkoo.com came with some help from Ballhype and a lot of the bloggers on Bloguin and guys I’ve worked with at Yardbarker were heavy users of the site, so it certainly is a sad day as many will lose this resource in their arsenal of ways to promote content.

I think the closing of Ballhype is especially tragic due to the fact that it was bought out and is now closing only a hair over 24 months later. A lot of hot startups break their backs trying to get an exit to a larger media company thinking it will allow them to continue to grow. The truth is many larger companies just don’t have a good feel for operating a startup and often have cultural issues with the community or the niche area in which they are operating in. As more sports blog entities find their way to greener pastures like The 700 Level, The Basketball Jones, The Big Lead, etc, you have to keep your fingers crossed that those entities continue to thrive and that corporate politics and cost cutting don’t lead to the demise of some this genre’s biggest success stories which seems to be the case here.

First and foremost, the site was slipping in terms of its significance. See charts below. 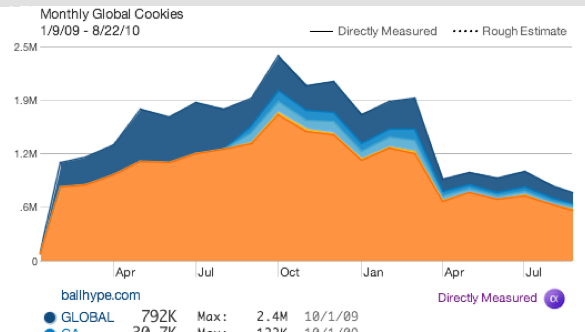 The chart above is the total amount of monthly visitors BallHype attracted. As you can see its been mostly in decline and clocks in at about 1/3 of its peak audience on October of just last year. While some of this may have just been seasonal declines, the chart seems to show that the audience is about half of where it was a year ago. Obviously this was probably a big part of the decision although nearly 800k unique visitors is still very significant and you’d think with the return of the football and other sports they’d be likely to get back to a million. Below is a look at the page views which paints a similar negative trend. Only averaging 2 page-views per visitor is also not an encouraging stat.

I think another item to mention in relation to this drop in traffic is that the effects are really felt in multiple ways. Less traffic means Ballhype can’t send as much traffic to blogs that promote their content. Less outbound traffic means bloggers are less motivated to use the site.  With quality bloggers not using Ballhype and the decrease of traffic you also have not as many votes on the site meaning the content filtering is not as good. All of these issues are intertwined and probably helped lead to the death spiral. Also similar to Digg, many users complained that mainstream media entities like ESPN was getting a lot of the promotion when the initial appeal of the site was to help promote content away from major portals.

Another thing is that I believe Ballhype after the acquisition started even smaller niche sites covering things like Fantasy Sports on its on hype style website which only further fragmented their core audience.

Out of the aggregation sites, really only Digg has been successful from an advertising perspective. I can’t recall what type of advertising programs BallHype had if any, but can attest that BallHype failed to garner a lot of buzz in the advertising world. Whether that was a failure on their advertising partners and sales team or aggregators are just unpopular as a whole, BallHype seemed to be stuck at a low level of revenue per page comparative to other emerging entities like SB Nation, Yardbarker, Bloguin, and Bleacher Report.

Twitter’s really blew up right around the time BallHype was acquired. Many in this business think Twitter is this biggest traffic driver for blogs and certainly it displaced Ballhype for many bloggers as their primary focus in terms of promotion. Facebook too has revamped their ability to connect users to external content (fan pages, like plugins) and with the usage of plugins and API’s a lot of this ability to promote is done automatically and to a wider audience.

Meanwhile general plugins that allow you to promote via tools like Reddit, StumbleUpon, FanFeedr, and Twackle have also encroached on BallHype’s turf over time. SI’s Hot Clicks and Bleacher Report’s Newsletters are also now very popular in terms of finding new content.  Essentially although promotion of sports content is a niche field, it got oversaturated very quickly.

4- They Couldn’t Find a Buyer

I would think that Future US made some type of effort to gauge interest in a buyer. While 1.5 million page views is probably not enough to really excite a lot of companies, I do think BallHype is significant enough from a brand, technology, community, and traffic standpoint that it had value.

My guess is that either they wanted to pull the chord quickly and didn’t bother to really investigate finding a buyer or more likely they couldn’t find an entity who would really keep the site on a similar path the original vision of the founders.

For any large acquisition, there is an internal champion. Someone who says “Let’s do this” and attaches their name to the strategic move. That person has to mobilize support, capital, and plan out the post acquisition fit into the bigger company. Once the smoke clears, you have a smaller startup that is hopefully well assimilated in a larger company who understands its needs.

But all too often it goes the other way and the acquiring company grows skeptical of their new asset. Resources that are needed can be withheld, decisions can be vetod, and focus can drift to other areas of the business.

The fact that on the surface its pretty clear that BallHype was losing money, its relevance was eroding, and potentially a lot of people involved on the acquisition on both sides may have left the company as time went on ,was most likely the larger driving factor that got us here today.

Where Do We Go From Here?

There could still be hope for a BallHype relaunch either with Future US or maybe a buyer comes to the table because of the shutdown. That would be ideal imo, to have some really sharp folks who get the space to come in and roll up the sleeves to make it a viable entity and valuable asset to the blogosphere.

If not, its unclear if anyone will ever fill this void. Digg does have a sports area, Yardbarker used to have a competing voting system, and Twackle seems to be getting some level of traction, but to recapture the adoption, goodwill, and significance BallHype would likely be a very uphill battle.

Another thing to consider is that really BallHype was just democratically curated sports portal. While its a great concept, each sports fan can tap into many great bloggers daily link dumps/roundups as a lot of bloggers have shown great ability to find and promote great content from around the web.

In the end it didn’t feel like someone pulling the plug but more like someone pulling the rug underneath a large amount of bloggers who had a connection with the site whether that connection was in the past or still alive. You have to wonder what Future US’s expectations were for BallHype when they bought it and how much money they are really saving by making this move. I think its possible that similar to Family Guy, there may be enough community support to have the site make a comeback but at the same token its going to be a lot of work and an investment so this really could be the end of a historic cog in the rise of sports blogs.

RIP BallHype. Like all good things, you went too soon.