On the heels of Sports Illustrated deciding to yield control of their website to Turner Sports, Sporting News has opted to ship off the popular The Sporting Blog to SB Nation. A very interesting move, one that was probably aided by the fact that SB Nation’s Senior Editor, Chris Mottram (Jaime Mottram’s brother and FanHouse guru), was actually the initial head of The Sporting Blog. From today’s announcement on TechCrunch:

Launched in 2007, The Sporting Blog is meant to be a slightly more fun take on sports news. But as SportingNews

, an outfit that is well over 100 years olds, is moving towards a more comprehensive coverage approach, they believed SB Nation would be a great new home for their blog.

While SB Nation has been putting a lot of work into their regional sites, The Sporting Blog content will help maintain their flagship site and inject some fun into it. The Sporting Blog archives will also be maintained a preserved, SB Nation CEO Jim Bankoff says. Terms of the deal were not disclosed — though we hear from sources close to the deal that little, if any, cash exchanged hands.

Its really hard to make sense of this deal on a couple of fronts, but if you read between the lines it seems as if SB Nation came to the rescue of The Sporting Blog which inexplicaly may have been on the chopping block. Somewhat of a bold ascertation but that’s what all the signs point to including:

– Other than Michael Tunison and Andy Hutchins, the other 7 writers will not be moving over with the blog.

– Dan Shanoff, one of the displaced writers, wrote “My column’s most recent home is traded to one of my favorite sports media companies.” It’s very subtle but the word traded is a big clue.

– Other contributors are insinuating that there is more to the story and that The Sporting Blog as we know it will not continue.

– The overall tone of the announcement on the Sporting News is somewhat somber. If SBN has approached them, offered them a lot of money for the site, you would think it would include all of the writers and The Sporting News would be a bit more celebratory about the move. Plus its inferred in the TC article that The Sporting News pulled the plug and then gave SBN a call . Again to quote the article, “But as SportingNews

, an outfit that is well over 100 years old, is moving towards a more comprehensive coverage approach, they believed SB Nation would be a great new home for their blog.”

Comprehensive coverage? I would think that would include 9 great writers who are revered in the sports blogosphere. Guess not.

–  Its not really articulated if thesportingblog.com will redirect to SB Nation or become its own site as part of SBN. Its very possible the site URL and the brand may actually not be involved with this deal. We should find out soon, but for now its seems SBN is really focusing on the fact they are getting the archives which makes me think that they were in danger of being deleted and SBN stepped in.

So maybe I am reading between the lines a little too much and connecting dots that aren’t connected (feel free to chime in in the comments), but it seems obvious that this to some degree just fell in SBN’s lap. That being said that doesn’t take away from positive implications of the move.

What this means for SBN

First and foremost Tunison and Hutchins are 2 great assets to have on board. I think the quality and quantity of content especially from non journalists is becoming more of a priority for startups in this space. Its something we’re working to improve at Bloguin, something that Yardbarker took some flack  for at Blogs With Balls, and something Bleacher Report is looking to change as their brand has taken a beating over the past year or so.

With SBnation.com as well as the regional sites becoming more of a focus for SB Nation, I’m sure having two talents like Tunison and Hutchins will certainly help as SBN continues to differentiate themselves to publishers, advertisers, and sports fans. Its unclear what they’ll do for SBN ( a new incarnation of the Sporting Blog or something else entirely), but its something to keep a close eye on.

It’s also noteworthy that SB Nation’s prestige seems to be opening up doors for them at this point. This really isn’t a major tech story, but TechCrunch thought it was newsworthy enough to write about. Also the fact that it seems SBN was sought out by Sporting News for this deal says a lot.

Dying to know what they gave up in the acquisition/trade. If I had to guess, I’d say they’ll be promoting something or other for the Sporting News (the magazine, special editions, sporting news articles similar to their syndication relationship with Yahoo, Fan House, or Comcast). We’ll see.

The other interesting item is that SB Nation announced they hired Anthony De Rosa to run a Tumbr blog for SB Nation which can be found here. Not too familiar with De Rosa so I’ll hold off on any comment on the hire for now. I think its pretty interesting that SB Nation is launching a blog on Tumblr though given how well received their own proprietary platform is. I’d love to hear the rationale behind this.

Tumblr certainly has a unique style and brings its own flavor of presentation and community interaction so its not crazy but certainly an interesting decision. For a company that really touts their platform (and rightfully so), they must see a lot of unique value in the Tumblr platform that couldn’t be replicated easily within their current platform.

What this means for The Sporting News

Well we don’t really know what happened behind the scenes here but this is peculiar move. While The Sporting Blog wasn’t a massive web property, it still did a good amount of traffic as exhibited below. 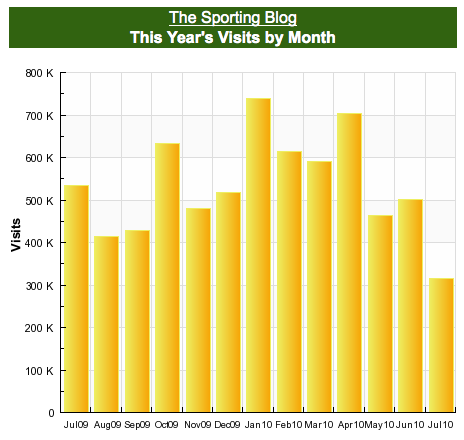 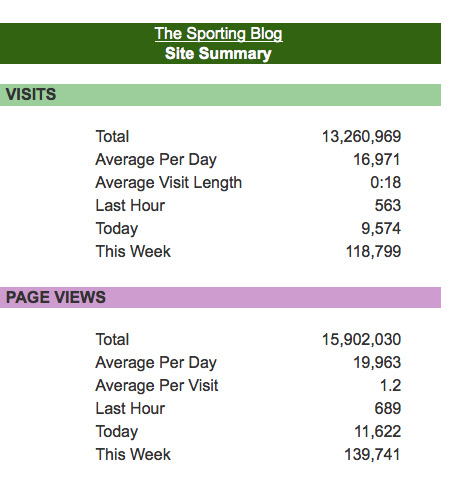 Not sure how they paid the writers but it seems likely they were losing money here. Still though it would have likely been a very small amount of money for a big company and I am sure The Sporting Blog could have been tweaked to be profitable if need be.

As noted before, this move occurs a little over a week after Sports Illustrated announced they’ll let Turner Sports who also runs digital properties for Golf.com, nascar.com, nba.com, and PGA.com. While Sporting News is going to continue running their website, its very questionable what the motives were to cut The Sporting Blog loose considering how strong of a brand and following it had.

I give credit to the Sporting News for finding the blog a new home as well as taking the initiative in 2007, when sports blogs were still not mature. But the sudden scuttling is a disappointing on many fronts and one that really could be elaborated on.

My total stab in the dark goes something like this:

The content higher ups at The Sporting News weren’t keen on the Sporting Blog. It was like the cool corner of a dive bar that was too loud and young for the regulars. This has happened before when a bunch web 1.0 people in charge at AOL got a little jealous/critical of Fanhouse’s stewardship under the Mottram brothers which led to them leaving.

At the same time, Yahoo is dominating with their sports blog coverage led by Jaime Mottram, and entities like NBC Sports with their impersonation of Y! Sports blogs as well as SB Nation, Deadspin, The Big Lead, FanHouse, and hell even Bleacher Report, became more viable entities that competed with The Sporting Blog.

With the blog space getting crowded and Sporting News needing a new way to differentiate themselves, they opted to tap into the genius of Buzz Bissinger and shutter the Sporting Blog to be blog free for the time being. This was done under the guise of improving their brand and cost cutting. They realized just shutting down something which had a lot of popularity and goodwill would not be good so they either reached out to SBN, or word leaked out to Chris Mottram who was the original visionary behind the site and a deal was brokered that didn’t require much capital.

Again none of that is substantiated at all  but given the lack of details, this is the most likely scenario in my mind. If anyone wants to throw out another theory or shed some light who is in the know, go for it.

Update– A couple of people replied that the theory above is close to what happened. Below is a Tweet from Chris Mottram. Also other people have indicated on Twitter that Brian Cook will be joining the fold which makes sense as I’ve heard his former college football blog will be switching its affiliation from CBS to SB Nation.

Another funny thing is that back in February, The Sporting News named former SI executive, Jeff Price, as their head of digital. He quickly axed fantasy games (probably a smart move), but was very vocal that they might look to make some acquisitions. In particular the author eluded to The Sporting News acquiring SB Nation or something like it in the future.

“Price led or took part in a number of investments and acquisitions while he was at SI, including the acquisitions of FanNation and Golf.com. Will he be shopping at ACBJ? “I think the reality is we’re going to look at the marketplace really hard. If we see gaps that really need to be filled, buying is one way to get there. But our core  competency is not going to be a tech company.”

Fast forward less than a half year later and The Sporting News hasn’t bought anything. In fact the startup that people suggested might be of interest to them, actually acquired a large asset from them and apparently for not much at all. In the end this goes down as a loss for The Sporting News and a win for SB Nation. Regardless of what the motives were behind this deal, The Sporting News is losing a popular property with great content, SBN is adding 2 great writers and a lot of content, and unfortunately 7 high quality contributors are now without that platform and income although can be found elsewhere.

I hope to have a follow up piece about something similar in the works in the coming weeks, but for now The Sporting News becomes another notch on bedpost for SB Nation to go along with Yahoo, CBS, NHL, and Comcast as mainstream entities that have shown SB Nation some love.