For a blog that is not updated that frequently, Benkoo.com actually does alright. Comments, traffic, links, and more importantly a good deal of people I respect visiting the blog regularly. But there is a lot of ground I don’t cover and it bugs me given that a lot interesting stuff goes completely unnoticed or uncovered.

Going forward I am going to try to do a roundup of industry news every 2 weeks or so. If you have a cool name for this feature that I end up using, I may just send you a Bloguin fleece*.

* = You will be required to wear the fleece on some nationally televised event in which you’ll be close to the camera and constantly pointing to the logo. Without further ado….

– A lot of curious eyes are on the fine folks at FanHouse as their operations begin to wind down. I’ve heard that prospects of employees catching on at the Sporting News is slim to none. In fact even though AOL painted a picture that some jobs may be transitioned over, I was told that on a conference call employees were told not to contact Sporting News directly and that AOL would forward resumes over if nudged to do so which is obviously not a good sign. The Sporting News will be reportedly paying FanHouse $5 million a year and have apparently been slimming down a bit as well.

– One Person not looking for a job is former VP & General Manager of FanHouse, Kevin Lockland, who has joined SB Nation as VP of Editorial. Over the past 2-3 years, there has been an incredible amount of employee movement between Sporting News, AOL, SB Nation, and Yahoo Sports. With a lot of talent available it will be interesting to see if Lockland is brought in to help harvest some FanHouse talent and bring them over to SBN or if he just fills a need at the growing company.

– It seems the mystery of who is behind the veryfakeBR twitter account is a little bit less of a mystery these days. The account is a pretty harsh although a popular satire of Bleacher Report. In the comment of my last articles, one of the B/R founders strongly insinuated that the account was authored by someone at one of their largest competitors. I’ve seen this reinforced on Twitter with multiple Bleacher Report employees being a bit more specific with their accusations.

This info tends to match-up with what was divulged when the person behind the account did an interview over at Chicago Now. Now if we could only find out what happened to DB Cooper?

– SeatGeek raised another round of funding. There seems to be another wave of ticketing startups that are getting traction right now. I am pretty familiar with SeatGeek and TiqIQ and think they’re both fresh takes to a rather stale industry.

– Deadspin has a new design that’s causing quite a stir. They’ve also got some new faces joining the team. I’ve wondered if 2011 is the year where Deadspin traffic actually hits a plateau.

– In a surprising move, ESPN is moving forward with a new web initiative led by Bill Simmons. Feedback on the site (not part of espn.com, won’t have ESPN branding, and staffed by a team of more blog style writers) has been very positive. The site will reportedly be a mix of sports and pop culture. ESPN has been VERY slow to embrace new innovative digital initiatives, so this move is definitely one to keep an eye on.

– On the same front, ESPN’s SweetSpot blog and network is still without a lead writer as Rob Neyer left for SB Nation. Tick tick tick….

– Former VP of the Packers and National Football Post President, Andrew Brandt, will also be working over at ESPN as a business analyst. Michael Lombardi left the site earlier in the year to join NFL Network. I wouldn’t be surprised to see the site sell in 2011 so stay tuned with a lot of the founding talent now working on new projects and involved with new roles.

– As you know my former employer, Yardbarker, is now part of Fox. If you visit any Yardbarker blogs, you might have seen ads promoting other Fox Sports properties. I’ve always though that Fox, CBS, ESPN, and NBC/Comcast would benefit from having a blog network to promote other initiatives. In fact some of those companies actually have spent a good deal of money advertising on Bloguin. Fox is now benefiting from the synergy of having a network of blogs to promote Scout.com and whatifsports.com. While advertising other properties makes sense, how to pay publishers for those ads has always been a bit tricky. 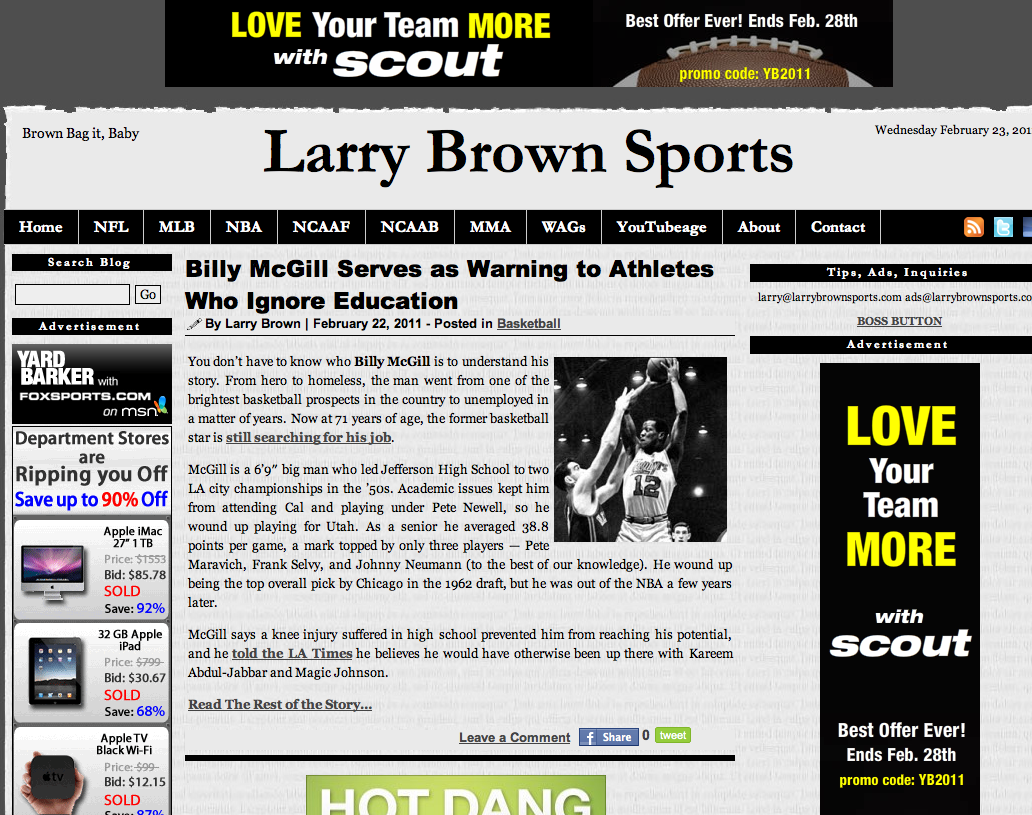 –  Balltribe.com launched not too long ago. It joins the ranks of Twackle, Ballhyped, Quickish, Hitpost, Chat Sports, and FanFeedr in the very crowded aggregation/curation space. I really don’t know if the market can really support all of these companies and would surmise that in 18 months the field of players is a lot thinner. Given that Bleacher Report has over a million newsletter subscribers (most of which are custom team/area specific), these companies might already be playing for second place.

– Fellow blog network Fansided, has left Yardbarker and is now part of FSV/Big Lead Sports. I believe originally as part of TheBiglead.com’s contract with FSV, there was an option for FSV to buy The Big Lead which they later executed and used as a focal point of a rebranding. I wouldn’t be surprised if there was a similar option for Fansided to be bought out by FSV which now goes by Big Lead Sports.

– Bleacher Report looks to be joining the likes of Yelp, Huffington Post, TechCrunch, Mahalo, and MetaCafe with a new focus on producing original video. Last year they made a huge investment in newsletters which proved to be a smart move. Video seems to be hot now so it will be interesting to see what this looks like when it rolls out and if they can build a big following there as well.

– FanVibe seems to adding advertisements to their fan engagement applications per a tweet that I just saw from good friend Arthur Chang. He doesn’t seem thrilled about it. Embrace the monetization Art!

–  Finally, Chris Cooley and others have launched SportsBuzz, a new venture help fans get more access to players and teams. What I thought was surprising is that it seems SportsBuzz actually bought Mouthpiecesports.com to help get the ball rolling. Mouthpiece Sports was never a huge site, but it did serve as somewhat of a farm system for writers who have sinced moved on to roles at ESPN, SB Nation, and Yahoo. Somewhat of a curious move for now. I don’t have a good feel for SportsBuzz at this point, but I do know it combines two things that have historically not worked well. a) monetizing athlete content b) charging subscriptions for accessing exclusive content. That said Chris Cooley is involved and seems to know the space well. Maybe they can succeed where many others have failed.

Thoughts on this new feature type? If you like it, here is another question for you:  Given it takes a keen eye to find all of this info, is it wise to share it here? Part of me is having lingering doubts that being the CEO of Bloguin and running this blog meshes well. I can easily piss off a competitor or partner as well as share a nugget of info which could be nice to just to keep close to the vest. Would love your perspective from all you smart folks.