Is a blog a news source? Are blogs part of the media?

These could be questions for a panel at a conference for pundits to debate back and forth. My take has always been that it really depends on the blog and what the criteria is for the organization that makes these type of determinations.

Given how influential blogs have become over the past couple of years, I think in a lot of cases blogs are not only news but the best source for news for particular niches. You could certainly say that TechCrunch, The Huffington Post, Gizmodo, and other blogs are considered the thought leaders in their space and definitely qualify as leaders in covering breaking news.

But what about sports and in particular Google’s role in approving sites to be aggregated onto Google News?

There are a handful of sports blog networks that have been able to procure that blanket accreditation for their networks. There is even in fact, BleacherReport.com, a quality site that allows any contributor to sign up for an account and potentially be syndicated onto Google News and other larger more focused websites. Although Bleacher Report has some filtering mechanisms in place in regards to what content gets promoted, unfortunately there have been several incidents this past year where stories that fell through the cracks were either completely untrue, plagarized, or incorrectly attributed to a major reporter as a prank.

I have some friends who work at Bleacher Report, know the founders, and am in no way saying I don’t like what they do, but just rather that the amount of content produced there by a wide array of contributors does lead to some quality issues. Not a big deal, but Google has rubber stamped content from Bleacher Report as news across the board. In some cases its well warranted. Other times its not.

In fact I was meeting with someone who told me his content is not syndicated onto Google News but sometimes he double posts content onto Bleacher Report. 2 weeks ago, after 48 hours of his content not being picked up anywhere he syndicated the article in full and less than 30 minutes later it was the lead news result for Texas Longhorns. Despite the fact his content is always of high quality and featured on many websites through various syndication agreements, Google News won’t bless his wildly popular site with their seal of approval.

Unfortunately at this point in time Bloguin doesn’t have a blanket approval. A lot of our sites are listed on Google News and we’re helping more sites get that approval, but it seems like a random roll of the dice if you get approved or not. The feedback we get is not clear, we never have dialogue with a contact but rather boiler plate responses from a generic email address, and the application process has no consistency in terms of criteria and end result. My guess its that Google has what amounts to a = boiler room of people rifling through hundreds of applications a day and that they’re numb to content and under the gun to made decisions on applications in a short period of time.

That is why I found this very troubling….. 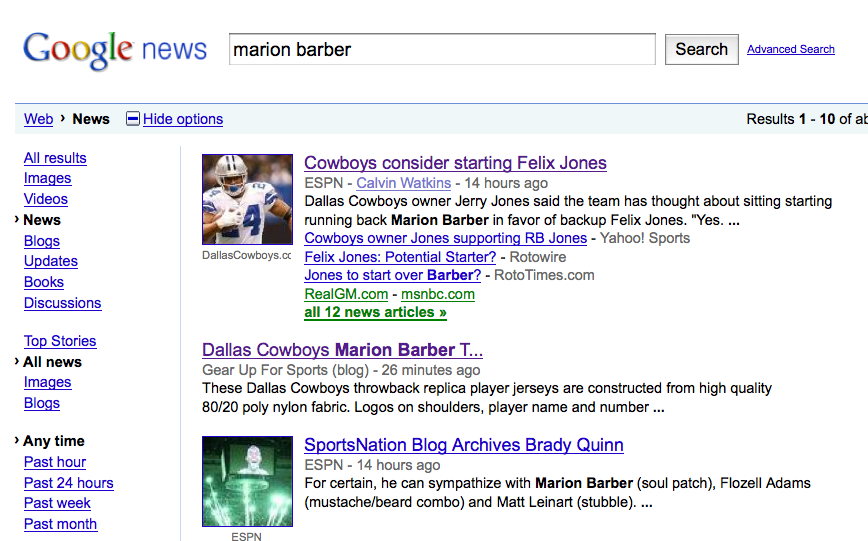 The back story here is that I wanted to see if there were any trade rumors about Marion Barber. My thinking was that the Cowboys have depth at running back, he makes a lot of money, and there are a lot of high profile players being moved right now. It was a hunch I wanted to investigate so I did a Google News Search.

And what did I find? The second overall topic that you see titled “Dallas Cowboys Marion Barber T…” on the screenshot above leads to this page.  Below is a screenshot of this riveting news about Marion Barber.

Yes. That’s right. A jersey for sale has been deemed news by Google. In other breaking news I am selling my Frank Thomas rookie card, Eddy George bobblehead, Rick Mirer jersey, and 1/3 of a bottle of Michael Jordan cologne. Its sad all of these items are actually in my possession.

Having an ecommerce website that also dabbles in content should certainly not be considered a news source for every piece of content they publish. I think the same can be said about a lot of sports blogs, Bleacher Report, and other sites listed on Google News.

If a site posted an article titled “Hoping to see Lebron James score 50 tonight” and the article basically said I’ll be gone at the game so I am not posting tonight and maybe tomorrow, that story is not news at all regardless of where it came from.

I understand that Google News can’t get it right 100% of the time, but what they can do is have a more transparent process and more dilligent in the sites they sign off as being a news source.

Earlier this year we had a pair of blogs get rejected, both of which are so respected in their subject matter that teams went out of their way to offer them credentials to games. How a pro team can determine a site is a trusted news source, yet Google can reject you and instead put jerseys up for sale in their place, is absolutely ludicrous. In one of these cases, the writer had been employed by the print industry for the last 15 years and only made the move to digital because his newspaper folded.

I am trying to reengage Google and hope to get more of an explanation on this front. Until then I implore them to follow their motto and “Do No Evil”. Relegating someone who works their butt off writing, interviewing, and attending press conferences off of Google News, while a website pimping a jersey gets promoted may not evil, but it certainly isn’t right.

Google is a gate keeper to the masses and should take its role a little more seriously if it wants to stay the sweetheart of the social media world.